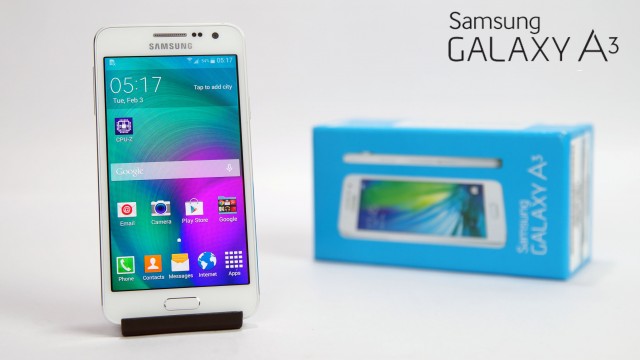 Samsung is slowly ending the plastic era, but this gradual shift needs some time, because mid-range smartphones are known for their affordable prices and if their builds are suddenly upgraded to metal, the prices will jump in the air and many fans won’t be very pleased about that. So, last year, in October, more exactly, Samsung released the Galaxy A3, with a full metal body, but because it cost 450 dollars, there were some bad comments about the price. Meanwhile, its price was dropped a little bit, so you can get it from Amazon, where it costs 280 dollars.

At a first glance, you will fall in love with the Galaxy A3 because it’s not a typical Samsung phone. You won’t find the famous fingerprint sensor incorporated inside the home screen button, as this feature is available for the S series, you won’t benefit from water and dust protection (it was removed from the S6 as well), and you won’t have the LED notification light. But, when you’re receiving a notification from one of the stock applications, your screen will automatically wake up.

The front panel looks like any other panel from other Samsung devices, but it is colored like the back panel and the color options are Pearl White, Midnight Black, Platinum Silver, Champagne Gold, Soft Pink and Light Blue. Above the screen you’ll see the Samsung branding written with silver letters and above them, on the right side there are the proximity and ambient light sensors plus the front camera which, surprisingly, is 5MP.

The phone has the headphone jack placed on the bottom, where there’s the microUSB port and the microphone. The second microphone is located at the top, near the edge (it has a row of holes), along with the removable Qualcomm 4G sticker, the volume rocker sits on the left, while the power button can be found on the right side and these buttons have also a metallic finish.

On the back, you’ll have the main camera with a resolution of 8MP in the center and in its right there’s the LED flash, while the speaker grille is placed in the right and (square shape). The camera is somehow prominent, but it doesn’t affect the phone when it’s resting on a flat surface.

The Galaxy A3 was Samsung’s thinnest phone, measuring 6.9mm, and despite of the metallic body, it’s very light at 110.3grams. Also, it’s 130.1mm tall and has a width of 65.5mm. We forgot to mention that the front panel has Corning’s latest Gorilla Glass 4 protection.

The Galaxy A3 doesn’t have a large display, because it has an acceptable size of 4.5inches. The resolution is qHD 540 x 960 pixels, which results a relatively low resolution of 245ppi, but which isn’t a big deal, because the images look sharp enough and accurate. Super AMOLED displays tend to put some pressure on the battery because they offer vibrant colors, but you’ll be satisfied with the contrast and the viewing angles.

This time, Samsung didn’t use its Exynos processor and used Qualcomm’s 1.2GHz Snapdragon 410 quad-core processor with Adreno 306 graphics and 1.5GB of RAM. This combination isn’t the greatest and it’s considered Galaxy A3’s biggest weakness. On paper, the device seems a lot weaker than the OnePlus One or the Honor 6, but these phones are more affordable, which is kind of frustrating.

Unfortunately, this game isn’t recommendable for the hardcore gamers for two reasons: the small screen with low resolution and because of the average graphics, but if you’ll play games such as Sonic Jump Fever, or Crossy Road, you won’t encounter any issues. If you’ll play Dead Trigger, then you’ll experience dropped frames.

The phone is shipped with Android v4.4.4 (KitKat), but it can be upgraded to v5.0.2 (Lollipop), which brought some optimizations for the 64-bit architecture. It’s not the case here, because the A3 runs on 32-bit architecture.

Samsung equipped the A3 with a non-removable battery of 1900mAh, which is too small compared to other mid-range phones. But, considering that the phone doesn’t have a demanding processor and that the qHD Super AMOLED screen is really energy efficient, you won’t complain about the battery life of this model. If you’ll use it moderately, the A3 will last through the day, but if you’ll continuously talk over 3G network, your phone will die after 12 hours.

If you’ll play a 90-minute video, while the brightness and volume levels are at the maximum, the juice will drop to 78 percent. Luckily, Samsung included the Power Saving and Ultra Power Saving modes, so you can extend the battery life of your Galaxy A3.