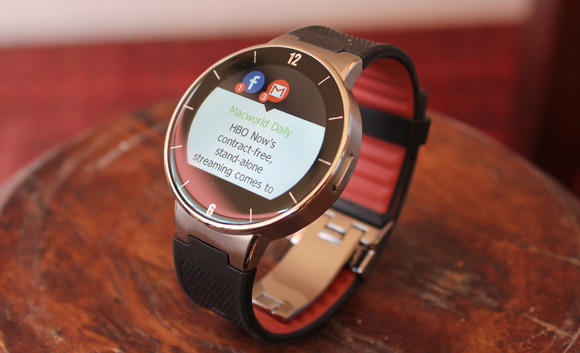 Priced at $150, this wearable is part of Alcatel’s plans to engage directly with its fans that are looking for an affordable device with decent specs. The Alcatel OneTouch Watch is to be a good alternative to other smartwatches such as Sony Smartwatch 3, because it stands out with its list of features, supporting activity monitoring, having media remote control capability and offering smartphone connectivity notifications. This smartwatch may not be the prettiest, it’s not a killer combo, but it has a long battery life and it’s compatible with both iPhones and Android smartphones.

The first thing that goes through your mind when looking at the OneTouch Watch is that it has a circular face like the LG G Watch R, Moto 360 or other Android Wear smartwatches, but there’s something about it that makes you want to roll it around your wrist, because it’s seems luxurious. You’ll have two types of straps: made of rubber and metal and they can’t be replaced. Of course, the tastes are different and some may prefer the rubberized sport band that combines perfectly with the metal body and circular display.

The smartwatch comes loaded with its own operating system, but you’ll see three interchangeable watch faces: one is digital and the other two are round analog-style ones. It has hour markers located around the outer dial and the background wallpaper can be changed with a photo you like the most.

You will struggle a little to put on the band because of the flip-out USB port located on the edge of its tip, but once you figure out how to pre-adjust the metal clasp, you won’t have any problems with the band, and it won’t feel uncomfortable around your wrist.

The screen is IPS and has a diameter of 1.22inches, offering enough space for icon placements. The resolution is 240 x 204 pixels and you won’t have problems reading whatever is displayed on the screen. For a better protection against scratches, Alcatel covered it with oleophobic coating.

Alcatel hasn’t provided the hardware specs for this smartwatch on the official website, but it’s known that device is powered by a ST Micro ST429 processor which is backed by 512 MB of RAM and has 4GB of storage.

The OneTouch Watch is compatible with smartphones running on Android 4.3 Jelly Bean or higher and iOS 7 or higher and supports Bluetooth 4.0 or higher, but when it comes to software, the device runs a proprietary operating system that uses Alcatel’s free OneTouch Move application.

The smartwatch delivers notifications, which means that you can keep your phone in your pocket and when someone calls you, the name and number will appear on your OneTouch Watch’s screen. The device notifies you when you have new messages or comments on Facebook Messenger and the Calendar reminders produce vibrations that you need to stop using a swiping gesture, otherwise they will stop after the preset timer (15 seconds) runs out. When you receive a text message, you’ll feel a short vibration, but you won’t see any info about the sender.

If you’re a careless person and you have a habit of leaving your phone on the table, when you’re in a bar and want to go and order a drink, then the anti-loss feature will come into action. When you’re too far from your phone (12 feet), this feature notifies you immediately.

Another feature that you will like very much is the one that allows you to control the music functions such as play/pause and skip forward and back. But the Alcatel OneTouch Move app does the entire job on your OneTouch Watch, as it acts like a fitness-tracking hub. The smartwatch will make use of its sensors: Accelerometer, Gyro, Altimeter, Heart rate and E-compass to monitor your health by measuring your steps, burned calories, distance and the duration of exercise goals.

It has better built-in basic fitness functions compared to the Pebble Watchm but it doesn’t support third-party apps like RunKeeper or MapMyFitness. We liked the face of the Alcatel OneTouch Watch because it has a scrolling menu with colored tiles.

The battery has a capacity of 210mAh and it has a longer life than Pebble or other Android Wear or Apple Watch smartwatches, lasting up to two days. You won’t need a cable to charge the battery, as you will use the built-in USB-charging tip from the end of the strap to plug it into a computer or into a spare USB wall charger.