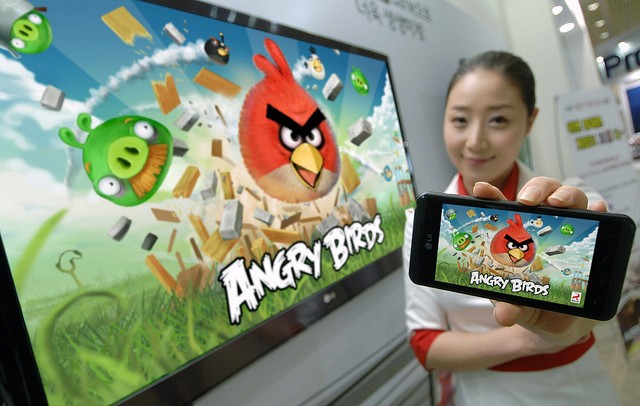 We all know the candidates. There are some games that are so addictive, such a pure shot of enjoyment, that we find it a task to drag ourselves away from them. No one is safe; even the Wall Street Journal has weighed in with theories as to why we find these games so addictive. Smartphones have been providing casual and hardcore players alike with world-class games for a couple of years now, so it makes sense that there are some absolute classics out there. We all know that casino games rule the roost with regards to replayabilty, so we haven’t included sites like Spin Palace here; instead we’ve just stuck to casual gaming. So without further ado, here are four of the most un-put-downable.

It’s the most simple of games, yet one of the most addictive I’ve ever come across. This little number also made our list of the Top 3 Time-Killing Games last month. You play as a cell, doomed to roam a flat, two-dimensional land full of other cells, all of whom are out to consume you. It’s Darwinism at its finest. As you eat your way through the stage, you grow in size, meaning you can cover more ground and devour more players. This is an online game, so you’re playing against real people, a large part of what makes the game so thrilling. It’s fast, it’s fun, and it’s dog eat dog out there. Just try walking away from this one.

You’ve stolen the cursed idol from the temple, and now you have to run for your life to escape the Evil Demon Monkeys nipping at your heels! Like a never ending chase sequence from an Indiana Jones film, Temple Run is a fast and furious game which simply doesn’t let up. You must direct a hapless chap as he navigates perilous ground, without being able to pause and take stock of your surroundings. Your character is seemingly unable to stop; a state you’ll become very familiar with if you play this game for more than sixty seconds.

The daddy of them all. The premise for this game doesn’t immediately scream global success; yet that’s exactly what happened. The idea is, you catapult some very angry birds into the constructions of a gang of evil pigs, who make for very shoddy architects; the slightest touch from your fearless bird will send the bad lads’ structures crumbling. This has been the number one iPhone app in more countries than we can count. Everyone all over the world can speak of the addictiveness of Angry Birds.

A relatively new entry on the list, but already the destroyer of many a social life. It’s an engaging puzzle game with a distinctive but simple style – one that involves dropping blocks to create and destroy vertical and horizontal full lines on the board. The key to this game’s addictiveness is to hook your profile up to Facebook so you can beat your friends’ scores, thus ensuring a long, drawn out cycle of viscous, unhealthy competition.